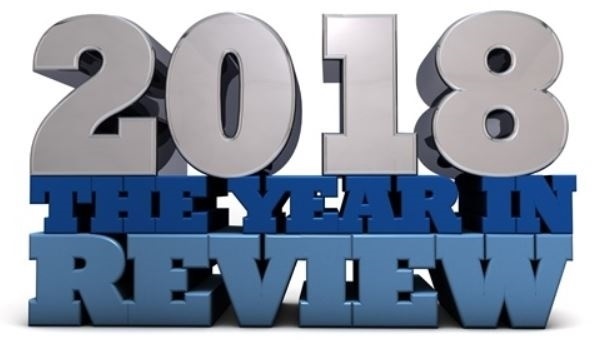 Every January, it's customary to look back at the year that was.  What were the highlights?  What were the "low lights"?  What were the events we'll always remember?  Most importantly, what did we learn?  When we review 2018, it's possible to draw very different conclusions.  If you were to Google "2018 year in review in the markets", you'd find wildly varying opinions from analysts, pundits, bankers, economists, and others.  They're all reviewing the same year - but their interpretations tend to be very different.  Here's why.

The Markets - It was a volatile year for the markets.  The Dow, S&P 500, and Nasdaq all ended the year lower than they started - the first time that's happened since 2008.1  The S&P and Nasdaq are in or near bear market territory, and the Dow had its worst December since the Great Depression.2  What's interesting to remember though, is that the markets spent most of 2018 climbing rather than falling.  The Dow soared to never-before-seen heights, and at one point, the Nasdaq was up 17.5% for the year!1  The first half of the year saw dramatic peaks and valleys too.  The markets shot out of the gate in January after the new tax law went into effect, but then quickly plunged in February.  The same pattern occurred in March and April.

What caused all this volatility?  To answer that, let's look at:

The Economy - It's a fact often forgotten by politicians and pundits, but the markets and the economy are not the same thing.  While the markets ended the year on a down note, the overall economy soared in 2018.  Observe these numbers - the unemployment rate was 3.7% as of November and the lowest in 49 years.3  Wages were up 2.9% from September 2017 to September 2018.4  The GDP was up 4.2% in the second quarter and up 3.4% in the third quarter; these are some of the highest numbers since the Great Recession.5

Those numbers paint a picture of a strong economy - a picture that drove the markets to great heights earlier in the year, as I just mentioned.  But it's a picture that doesn't tell the whole story - which is why the economy is likely slowing down.  The economic expansion has been driven for years by historically low interest rates - rates the Federal Reserve continues to raise.  This, in turn, has affected the housing market and the stock market.  Oil prices have plummeted too, which is good for consumers at the pump but bad for the energy industry.  Meanwhile, many of the world's largest economies are also slowing down, especially in China and Europe.  In this ever-more connected global economy we all participate in, the spells trouble.  While good economic numbers cited above helped propel the markets, all these concerns helped bring it down to earth again.  And if these trends continue, 2019 could bring even more market volatility.

The Future - that said, a slower economy is not the same as a stagnant economy.  Interest rates are rising but still relatively low.  Corporate profits remain steady, consumer spending is thriving, as is the labor market.  In my opinion, these are all indicators of a healthy economy in 2019, even if it's not quite producing at the same pace it was before.  On the other hand, there's a ceasefire in the trade war with China, but it could pick up again at any time.  As of this writing, the federal government is experiencing another shutdown.  Furthermore, a large portion of the economy's growth over the last decade has been prompted by fiscal stimulus from the government - stimulus that will be harder and harder to provide as the nation's deficit climbs and climbs.6  Take away that prop, and what happens to growth?

The fact is, investors often tend to be both irrational and impatient - a volatile combination.  While the economy may be technically strong, trends are what anxious investors pay attention to.   And if the economy looks like it's trending down, it's quite possible the markets will follow.

The Takeaway - if you look at all the points and counterpoints made above, though, the logical conclusion is that 2018 was neither a "good" year or a "bad" year.  It was...a year!  The markets were volatile, but the economy was strong.  Similarly, there are indicators of economic strength for 2019, as well as signs that market volatility may continue.  Pundits can make many arguments about how the markets will go, all based on actual facts.  But their interpretations of those facts can be very different - and that says more about them than anything else.

Here's why that's important:  When we form an opinion about something, it's often colored by which facts we value more than others.  For example, think about when someone asks, "How was your day?"  Most days are usually a mixture of good and bad things, aren't they?  Whether you saw our day as a good day or bad would depend largely on which events mattered more to you.  If you're someone who thrives off praise and accomplishment, it was probably a great day!  If you're someone who is extremely schedule-oriented, the fact you got stuck in traffic and worked extra late would probably make it a bad day - or at least not one you'd remember with any fondness.  Either way, the facts didn't change - only your interpretations of them.

Similarly, what we expect of 2019 largely depends on which facts we value more than others.  As investors, it's critical that we remind ourselves about this tendency.  Whenever we select an investment, formulate a plan, or make a decision, it's useful to ask ourselves, "Which facts are causing me to think this way?  Which facts am I overemphasizing more than others?"  By doing this, we can avoid both undue optimism and overt pessimism - becoming more balanced, less emotional investors in the process!

Whatever 2019 has in store, rest assured there will be both obstacles to avoid and opportunities to seize.  But whatever happens, we here at Landmark Financial Services will continue analyzing all the facts and data to help you make smart, unbiased, unemotional financial decisions - both this year and beyond.  As always, please let me know if there is anything I can do for you in 2019.