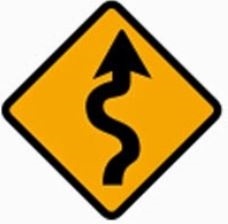 If you ask an economist what makes them toss and turn at night, chances are they'll tell you, "Fear of missing the warning signs of a recession."  After all, for anyone who studies the economy for a living, few things could be worse than a sudden economic slump catching you by surprise.  That's why many economists rely on certain indicators to predict if there's rough weather ahead.  Historically, one of the most reliable indicators is the inverted yield curve.  This is when the yield on long-term bonds drops below the yield on short-term bonds.  Why does this matter to economists?  Because an inverted yield curve has preceded every recession since 1956.1

On August 14, the yield on 10-year Treasury bonds dropped below 1.6%, officially falling beneath the yield on 2-year Treasury bonds for the first time since 2007.4   That's an inverted yield curve.  The markets responded the way children do when a hornet gets inside the family car - they panicked.  The Dow, the S&P 500, and the NASDAQ all fell sharply, with the Dow plunging over 700 points.3  The obvious question, of course, is "Why?"

It's a smart question!  To the average investor, the term "inverted yield curve" probably doesn't sound very scary.  So, why does it have the markets freaking out?  Let's break it down by answering a few basic - but also smart - questions.

A bond yield is the return you get when you put your money in a government or corporate bond.  Whenever an investor buys a bond, they're agreeing to loan money to the issuer of that bond - the government, in the case of Treasury Bonds - for a specific length of time.  Typically, the longer the time, the higher the yield, as investors want a greater return in exchange for locking up their money for years or even decades.  That's why the yield on long-term bonds is almost always higher than on short-term bonds.  When those trade places, we have an inverted yield curve.

2.  Okay, so why have bond yields inverted?

Bear with me here, because I'm about to get a little technical.  Bond yields have an inverse relationship with bond prices.  That means when prices go up, yields fall, and vice versa.  What do I mean by price?  Well, investors must pay to buy bonds, of course, and when more people buy them, the price of these bonds goes up.  (It's the basic law of supply and demand:  When the demand for something increases, so does the price).  When that happens, yields drop.

Investors often see bonds as safe havens of sorts, especially during economic turmoil.  Stocks, on the other hand, tend to be seen as "higher risk, higher reward" investments.  In this case, investors are selling their stocks and plowing more and more money into long-term bonds, pushing prices up and yields below that of short-term bonds.  The fact investors are doing this  suggests they're not optimistic about the near-future health of the economy and are seeking safe places to park their money.

3.  Why are investors so worried about the economy?

On the home front, it's largely because of the trade war between the U.S. and China.  As the two nations engage in an ever-growing battle of tariffs, the fear is that businesses in the U.S. will have to raise prices, thereby hurting consumers.  On August 13, President Trump decided to delay the most recent round of tariffs until December, saying he didn't want tariffs to affect shopping during the Christmas season.5  Previously, Trump predicted tariffs would not hurt U.S. businesses, so this  sudden about-face suggests even he is worried.

Investors are also worried about a slowdown in the global economy.  Two of the world's most important economies, China and Germany, have both shrunk.  Put all these things together and it's not hard to see why investors worry about a recession in the near future.  Fears the recent news about inverted yield curves will only stoke.

4.  So is a recession imminent?

As I mentioned earlier, inverted yield curves have preceded every recession since 1956.  This includes the Great Recession of 2008.  But does this mean a recession is just around the corner?  NO!

There are two things to keep in mind here.  First, a brief inverted yield curve is not the same thing as a sustained one.  While inversions have preceded every modern recession, inversions do not always lead to a recession.  Think of it this way:  You can't have a rainstorm without dark gray clouds.  But dark gray clouds don't always lead to a rainstorm.  Make sense?

You see, correlation does not equal causation.  By this I mean that while inversions and recessions are often seen together, one does not actually cause the other.  An inverted yield curve is like a sneeze:  It's a symptom, not the disease itself.  And while a sneeze can mean you have a cold, it doesn't lead to a cold.  Sometimes, we sneeze because we got pepper up our nose.

Second, let's assume for argument's sake that this recent inversion is a warning sign of a future recession.  That doesn't mean a recession is imminent.  Some analysis suggests that it takes an average of twenty-two months tor a recession to follow an inversion.1  That's a long time!  A long time to save, invest, plan and prepare.

5.  So does an inverted yield curve even matter, then?

I'll put it simply:  It matters enough to pay attention to.  It doesn't matter enough to be worth panicking over.  Make no mistake, we're in a volatile period right now.  There's a lot of evidence to suggest that volatility will continue.  But while comparing the markets to the weather has become something of a cliche', it also makes a lot of sense.  When storm clouds gather, we pack an umbrella or stay inside.  We don't run for the hills.

The same is true of market volatility.  Remember, an inverted yield curve is an indicator, not a prophecy.  Economists can toss and turn about such things, but you and I are focusing on something much less abstract:  your financial goals.  More important than any indicator, more important than the day-to-day swings in the markets, is the discipline we show.  If you think about it, market volatility is really a symptom, too - a symptom of emotional decision making.  Investors see a good headline, and they buy, buy, buy!  That's a market rally.  Investors see a bad one, and they sell, sell, sell!  That's a market dip.

Investing based on emotion leads to one thing:  Regret.  Regret that we bought into the hype and bought when we should have waited for a better deal.  Regret that we fell into fear and sold when we should have held on longer.  We invest by being disciplined enough to buy, hold, or sell when it makes sense for your situation.  That's the best way to stay on track toward your goals.  That's the best way to not toss and turn at night.  We don't make decisions based on predictions.  We make decisions based on need.

This article was prepared by Bill Good Marketing.